Hello there! How are your New Years resolutions getting on? Dreams of a healthier lifestyle? Goals of a thinner, slimmer you? Well fear not! Because I am here to help…. 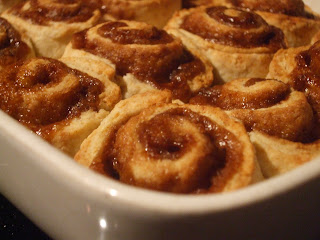 I love cinnamon. I put it in everything - on porridge, in cookies, in crumbles; even on toast with honey and banana! It's one of those spices that just makes you think of home and warm fuzzy feelings.

I'd had my eye on some cinnamon rolls for a while now, but  there was one small problem with most of the recipes I'd seen -  they all contained yeast!

It's not that I don't mind using yeast. In fact, I love the smell of fresh bread being proved in the kitchen; it fills the room with such a beautiful smell. However, I dislike the amount of time it takes to make things using yeast. In our busy society, one simply doesn't have two hours to spend waiting for bread to rise! And that's even before the 45 minutes in the oven…

I found the recipe for these rolls on that wonderful site named Pinterest. (Follow me @emmagracer!) They're from Iowa Girl's blog; originally taken from In Jennie's Kitchen, and they've been tweaked along the way! I left out the cream cheese icing because I just wanted a plain cinnamon roll, nothing too fancy; and it means that I can freeze them for nibbling later on in the month!

Tip: Eat them fresh. And why not try them with a little vanilla ice-cream for dessert one evening? You'll thank me later.

Directions:
1. Preheat oven to 425. Combine filling ingredients in a small bowl, then mix with a fork until well blended.
2. In another, larger bowl, combine flour, sugar, baking powder, baking soda and salt. Whisk together buttermilk and 4 Tablespoons melted butter in a separate bowl, then pour into the middle of the dry ingredients. Stir together until dough just comes together  Kneed slightly with your hands until the dough forms into a ball, then slice it in half.
3. On a lightly floured surface, roll each half into a 12×8″ rectangle (think slightly longer than a sheet of paper.) Press half the filling mixture into the centre, leaving 1/4″ of the dough clear on all 4 sides, then roll like a sausage. Pinch together seam, trim ends and cut into slices. Repeat with the other dough half, then place rolls in a non-stick sprayed rectangular dish.
4. Brush cinnamon rolls with remaining tablespoon of melted butter and bake for 15 minutes, or until tops are golden brown.