Today is the day. Today, we’re going to walk the York city walls. 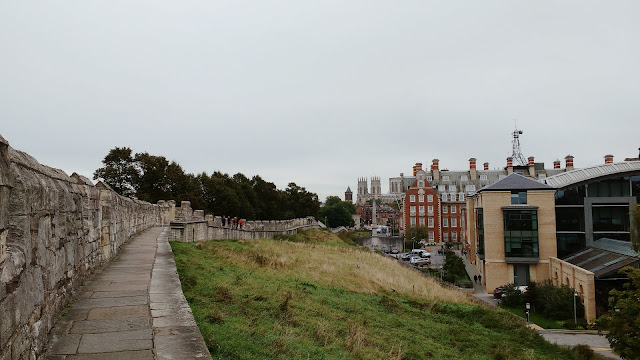 These large, imposing stone structures enclose the old town now as they have done for many centuries, though now the town has expanded, overflowing onto the other side like an unstoppable living organism. The walls are unbelievably thick, constructed from heavy chunks of stone, and I wonder just how the builders managed to transport them without injury all those years ago.

We enter the walls by the Bishop’s Gate, posing for a photograph on the way. I almost feel like I’m going back in time as we step off the noisy road and into the wall, where a strange sort of calm pervades, high above the cars and pedestrians of the city below. Did the Roman soldiers on patrol sense this, too?

It’s a damp morning and a soft, feathery mist has gathered gently on the rooftops. It’s not enough to obscure our view, but coats the city in a light, downy dust, enshrouding it in mystery. We begin to walk along the ramparts, stopping every now and then to admire a building on the other side or consult the map to see where we are. It’s a new experience for my family and I, who, having owned a dog for the past thirteen years, are more used to tramping along a muddy forest path than atop these upright, proud walls.

As we progress along the snaking ramparts, we receive short yet profound glimpses into the lives of York’s inhabitants. We’re practically walking over their back gardens, privy to the messy, mossy lawns and paving stones covered in weeds, as well as the neatly-landscaped hedges and gardens strewn with children’s toys. It’s strangely intimate, and we discuss the potential merits and pitfalls of living in such houses.

In some places, proprietors have taken advantage of the wall. There are several tiny cafés tucked in amongst the old gatehouses, decorated in twinkling fairy-lights and furnished with cosy chairs; an oasis of peace away from the hordes of camera-wielding tourists just a few minutes away. But even this feeling changes as we get closer to the Minster. We pass the train station – beautiful in its own way, when viewed from the walls – and notice a building that looks as if it has come straight from an Amsterdam canal. It becomes even more intriguing when we see that it is surrounded by electronic gates. Is it a hotel? A government building? We resolve to look for it online later on.

The time has come for us to quit the wall, just under an hour after our walk began. We’ve had a tranquil start to the morning, but cannot ignore the rest of the city entirely. We decide to keep the remainder of the walls for our next visit, which comes just a few months later, and so, our minds turned towards thoughts of a hot drink, we descend.
Labels: memories travel york