I really should be putting more healthy recipes up. The thing is, although I do eat healthily most of the time (I only post my favourite treats up here....) on a weekday night, there is no time to take photos. Any photos that are taken are blurry and tinted yellow. Sometimes I'm a little jealous of people who blog for a living and can afford to spend all their time on making food look pretty!

Anyway, more savoury dishes will come - I'm thinking of some pork meatballs in a herby tomato sauce; maybe some sort of vegetabley noodle mixture....? I've even been considering recreating a lovely breakfast I had in America - chocolate chip pancakes! Stay tuned.

For now, I'm settling for another yeast roll recipe. This time, the dough has been rolled thinly enough to make proper swirls - remember the Nutella roll problem? - and it's stuffed with sweet cherries, prunes and raisins. It sounds like a rather old fashioned mixture but to be honest, it's very tasty - especially with a milky cup of tea in front of the fire! 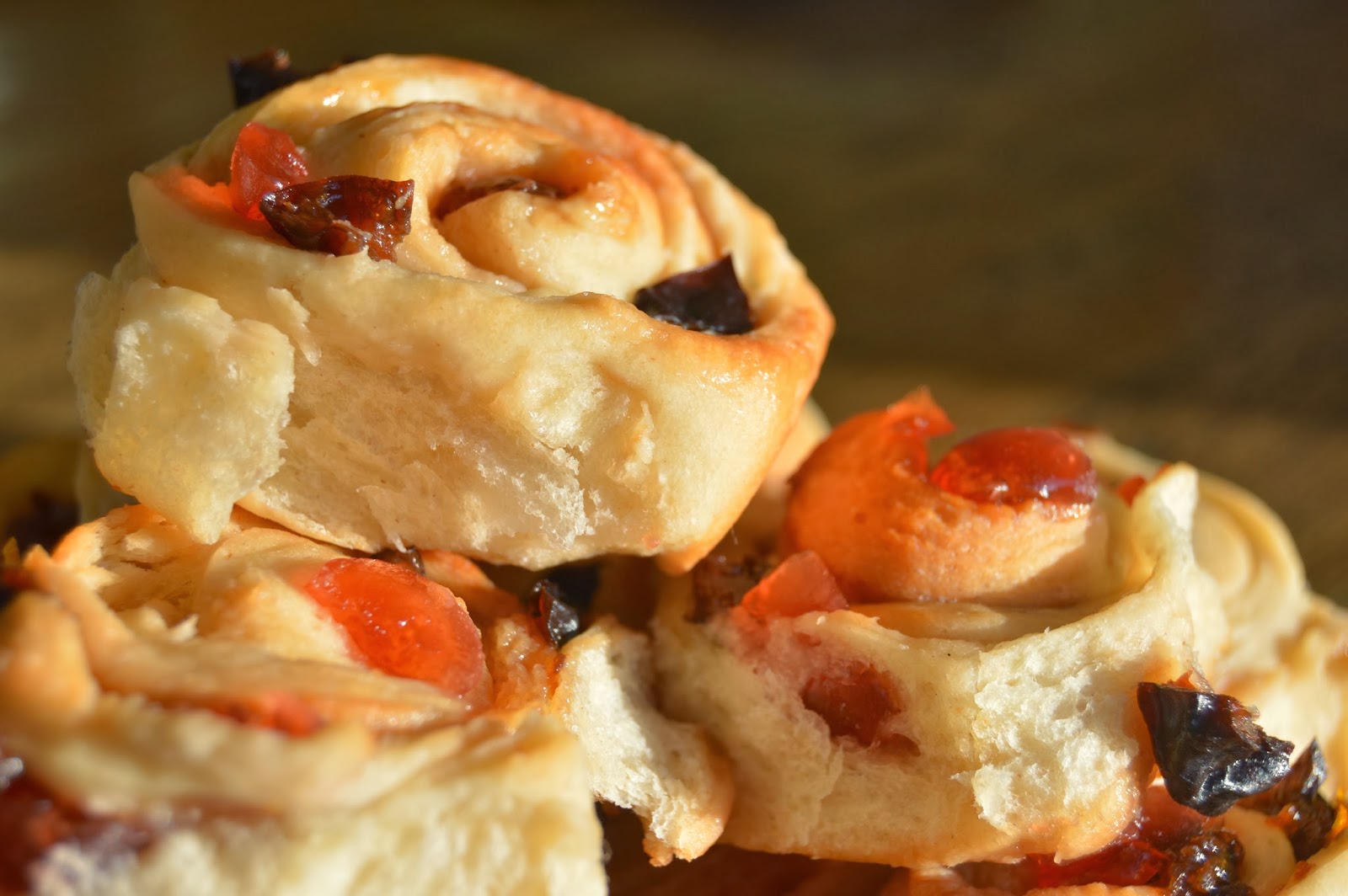 Inspired by a recipe from Sainsbury's, this recipe uses Armagnac infused prunes for a bit of extra interest - but to be honest, they're not essential. Swap for ordinary prunes if you want, or switch with dried apricots, currants or more raisins and cherries. 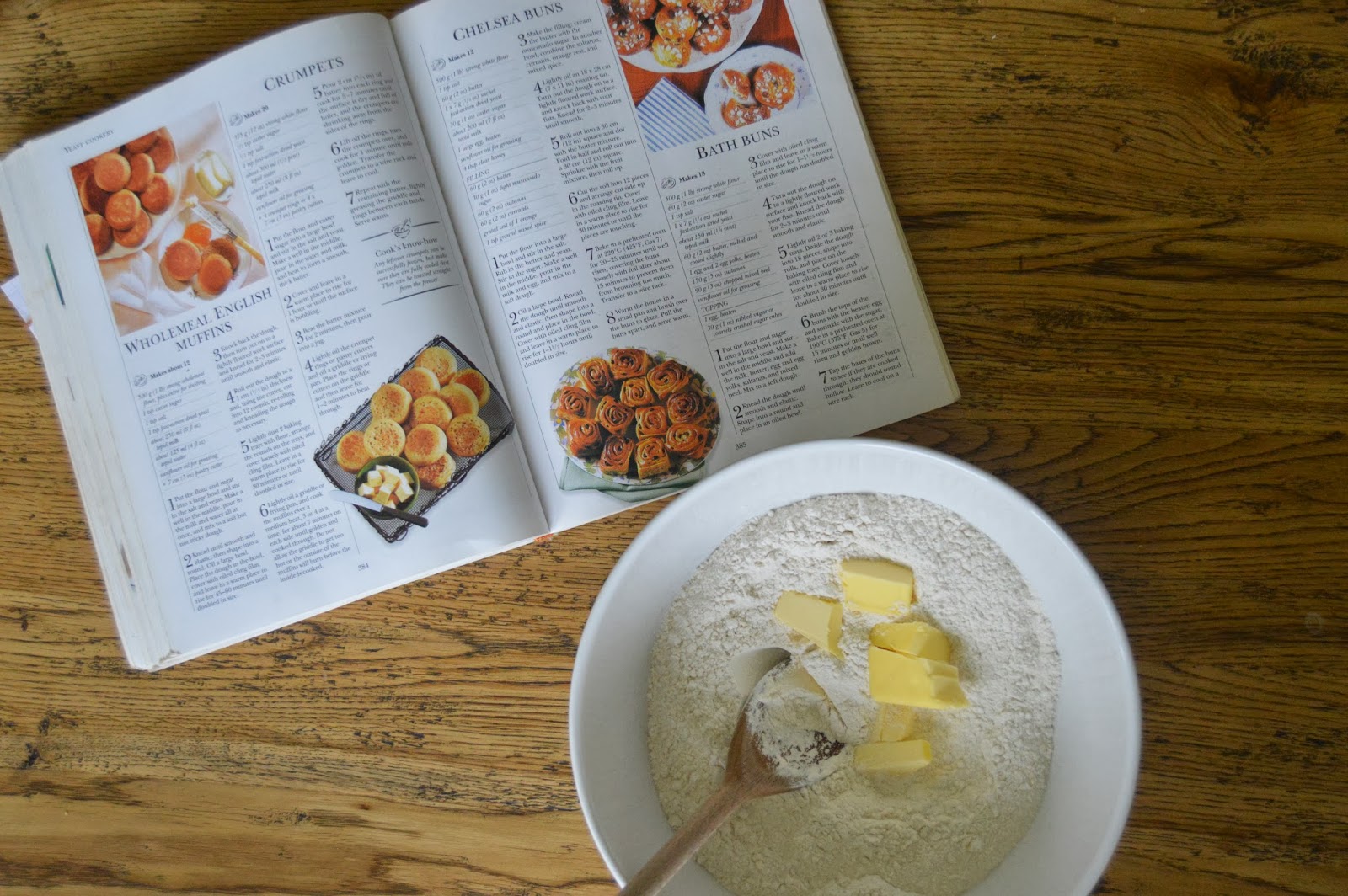 Start with flour, yeast and butter. 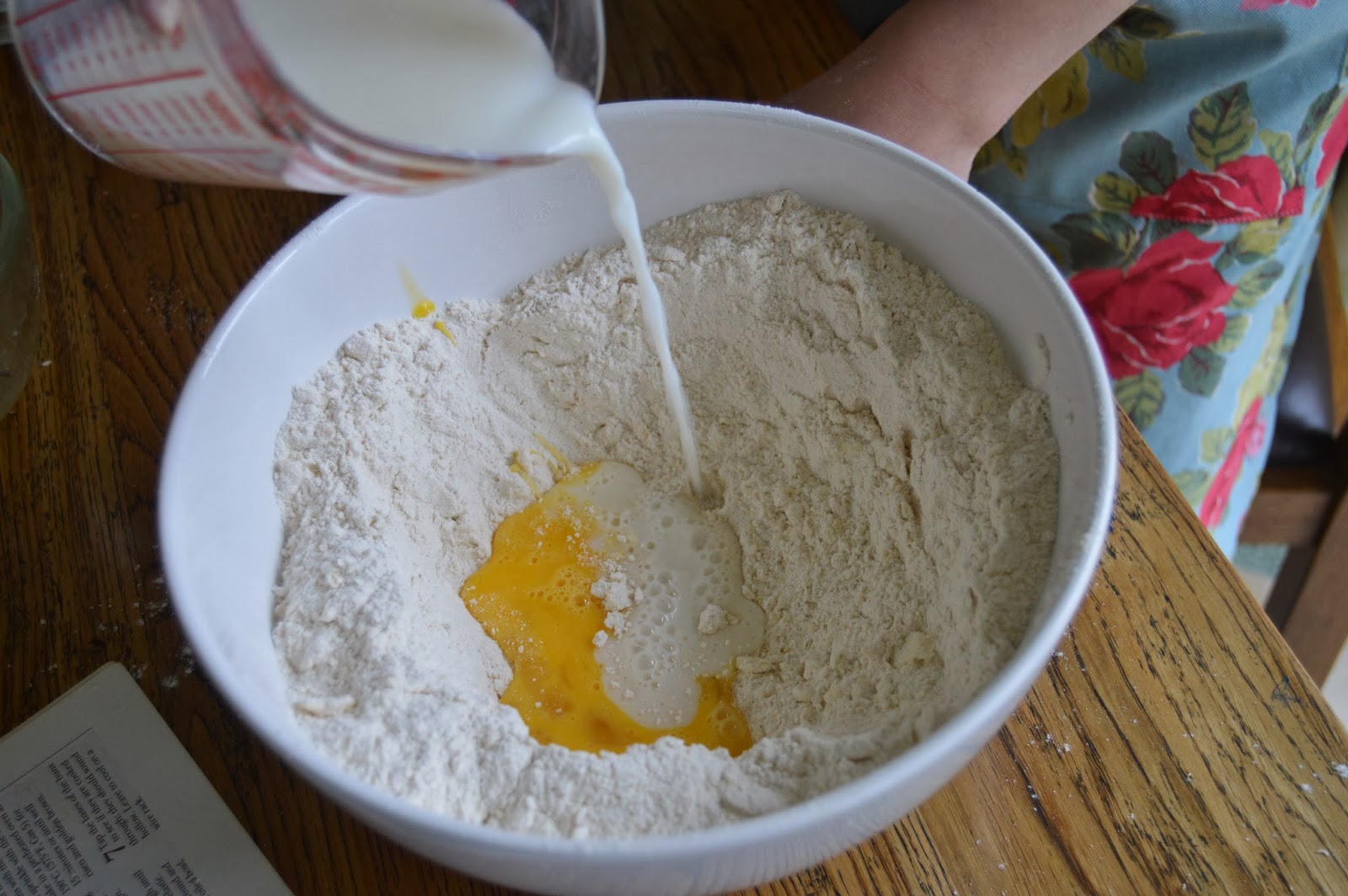 Stir in the eggs and milk. 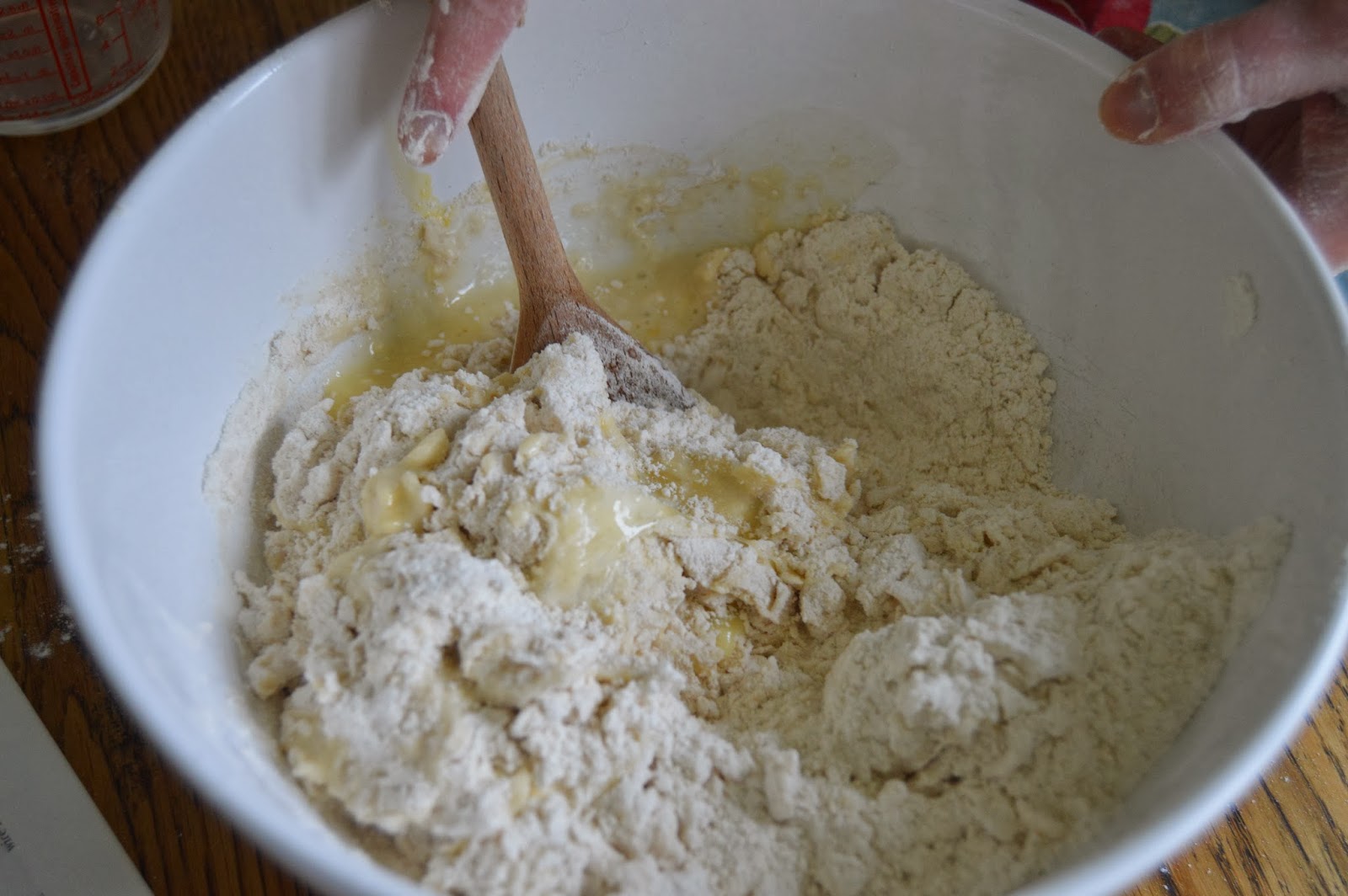 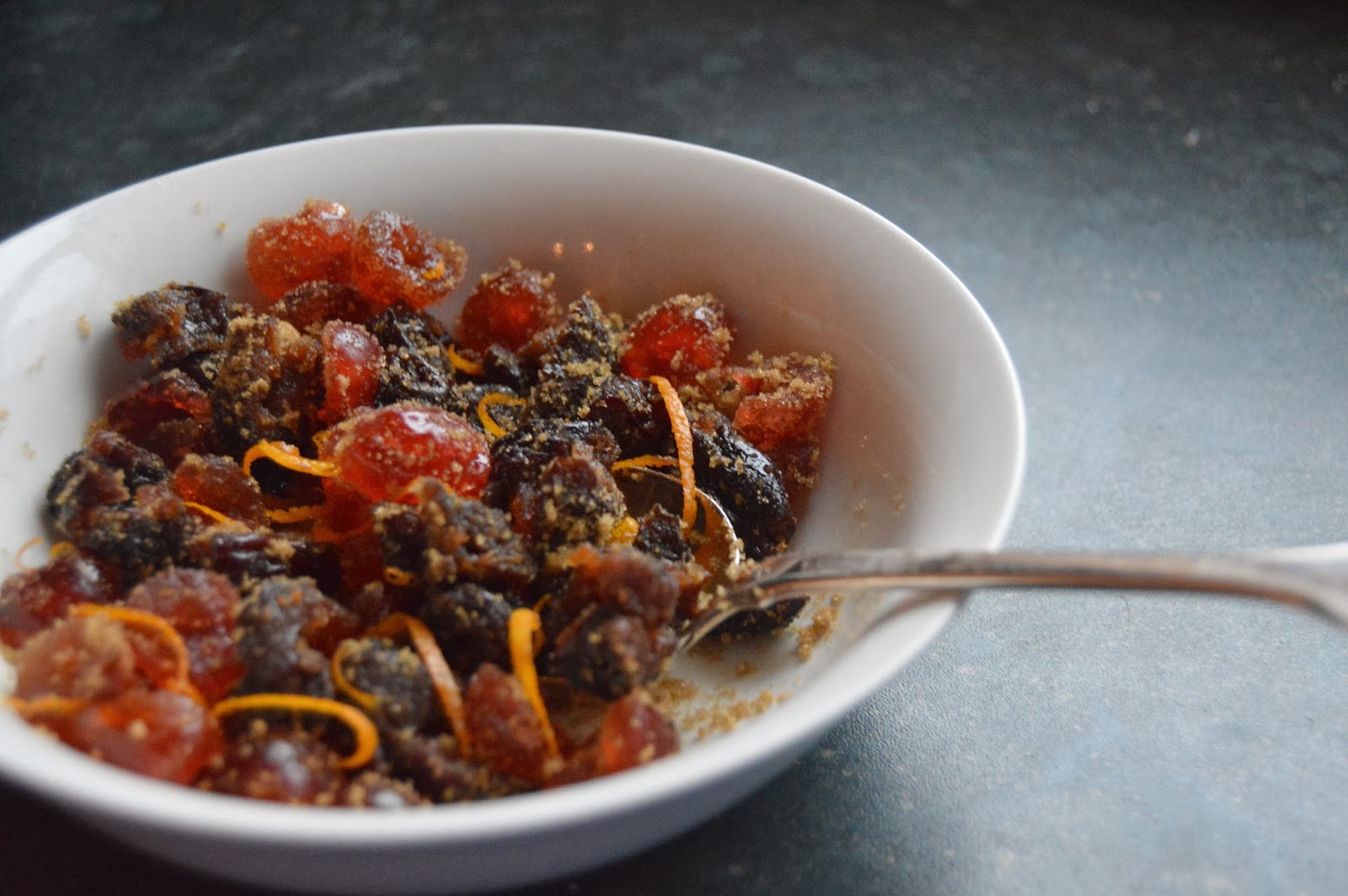 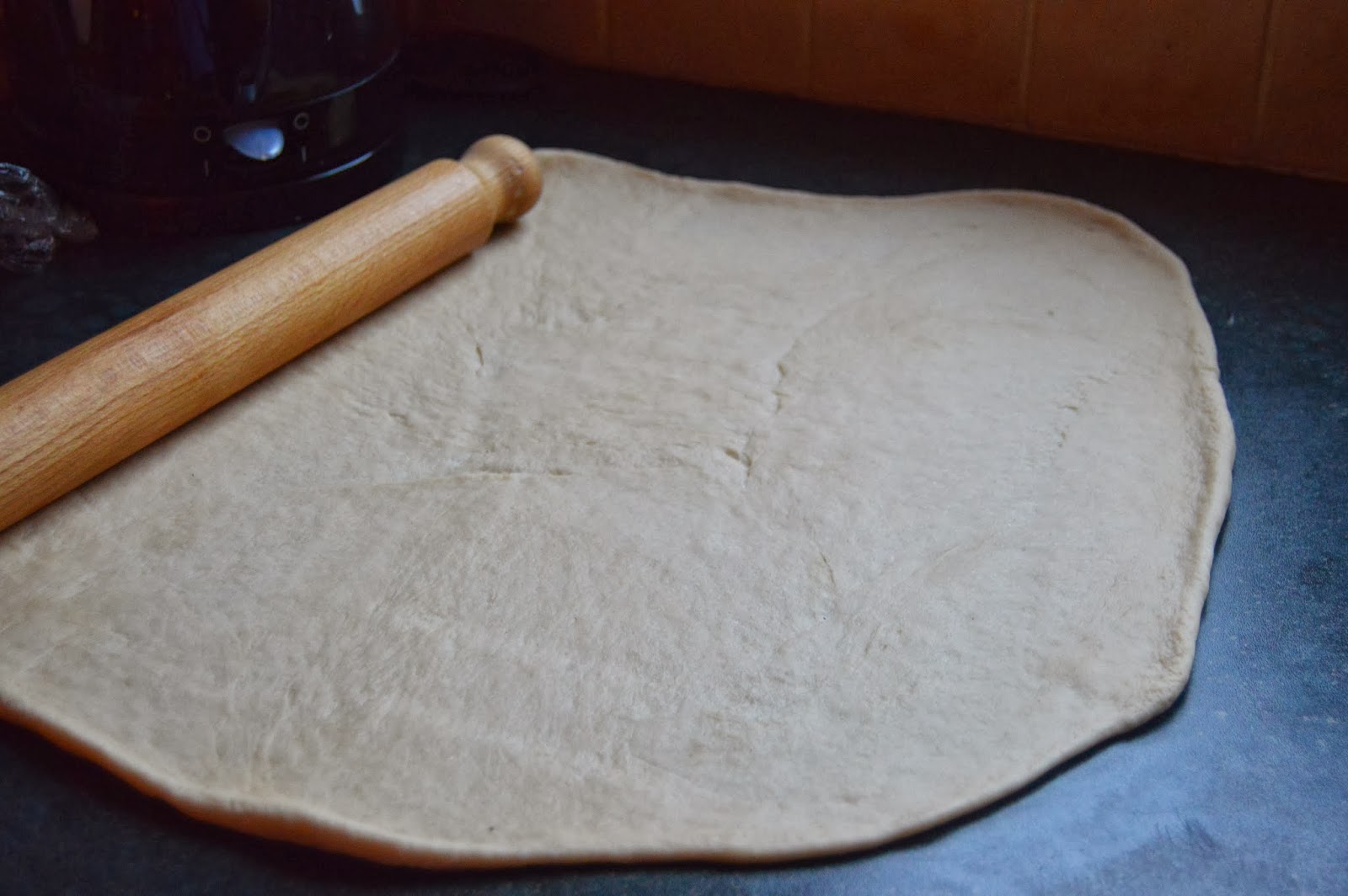 Roll out the dough - thinly! 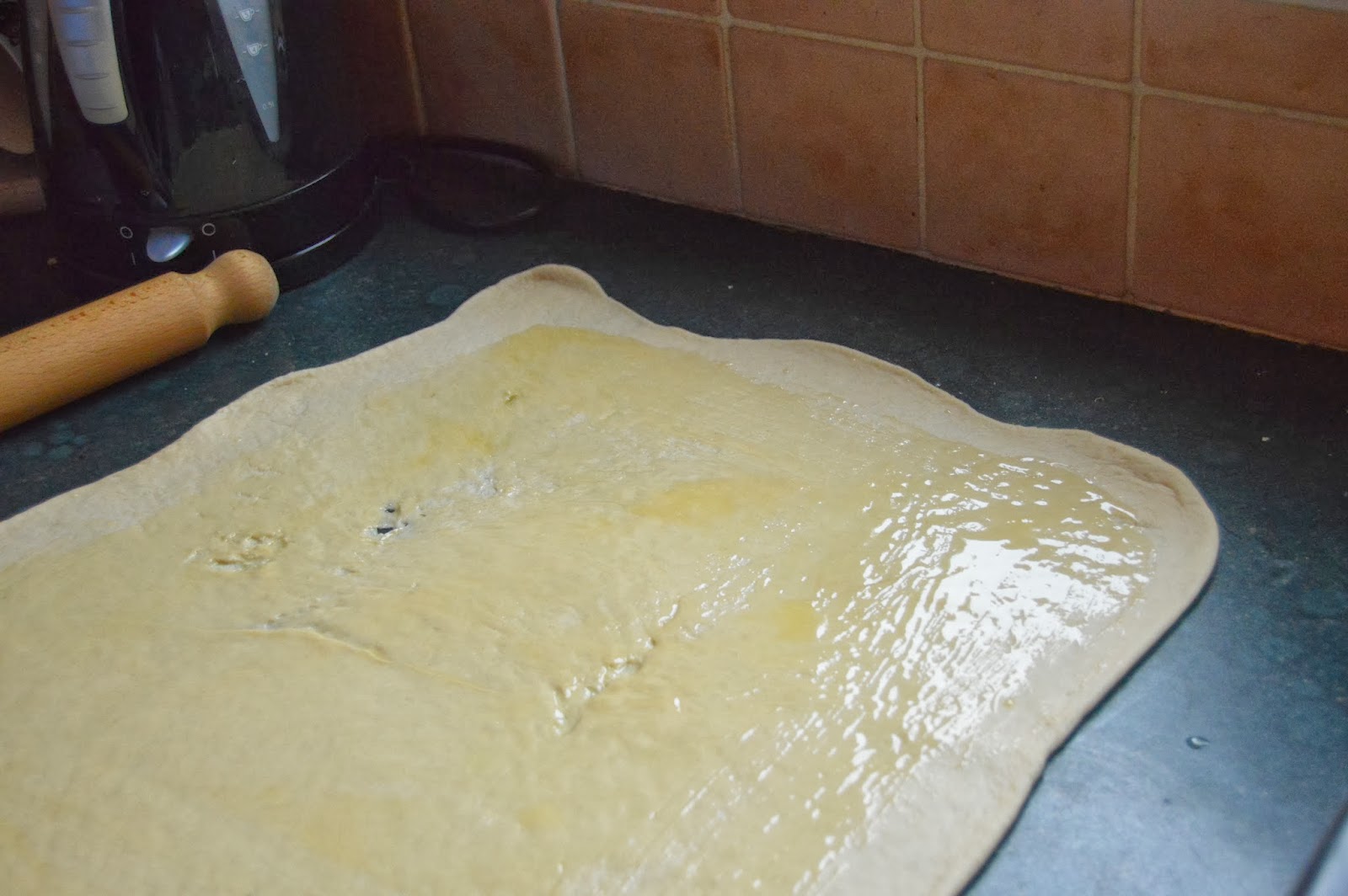 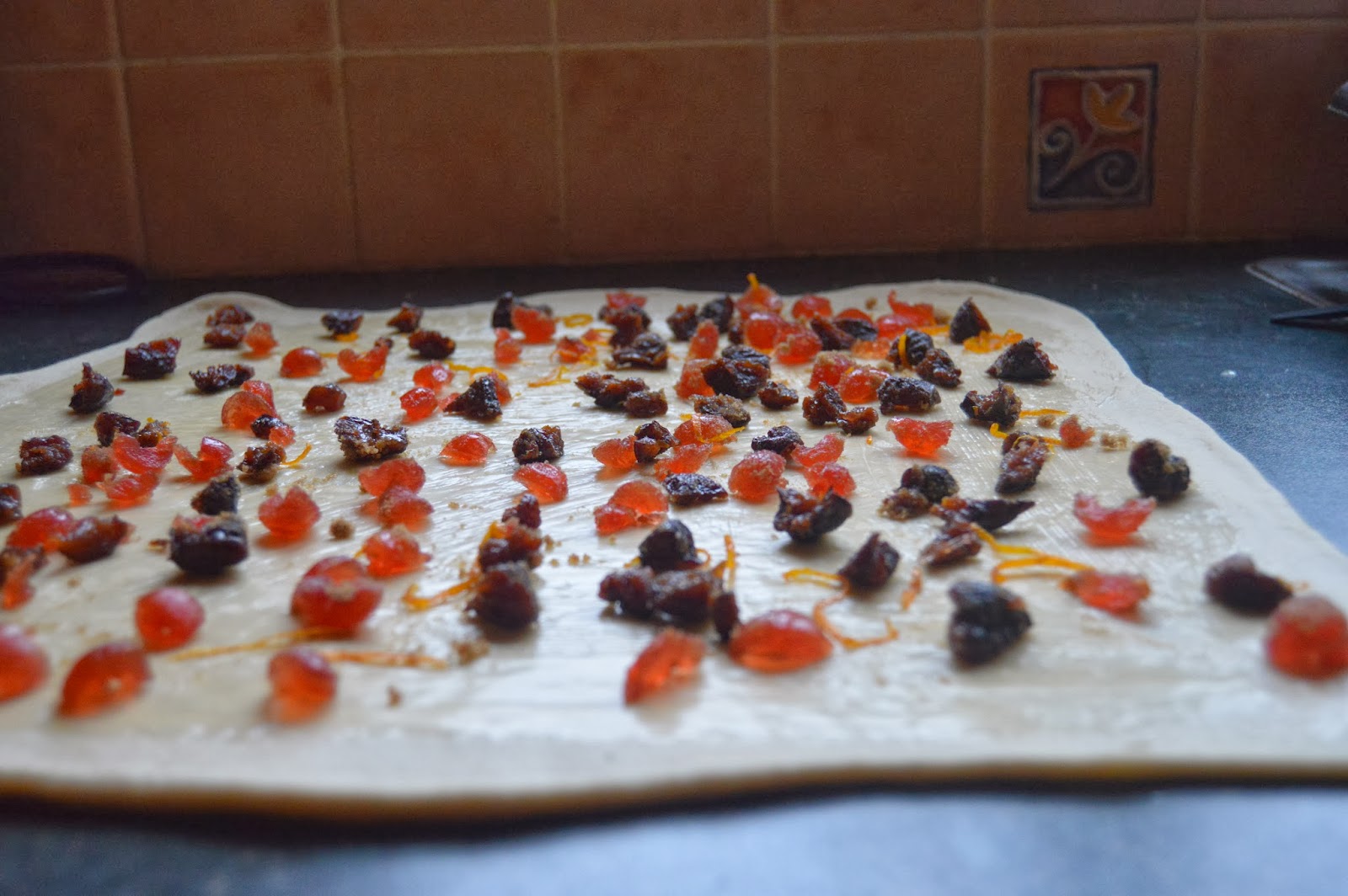 Sprinkle over the dried fruit. 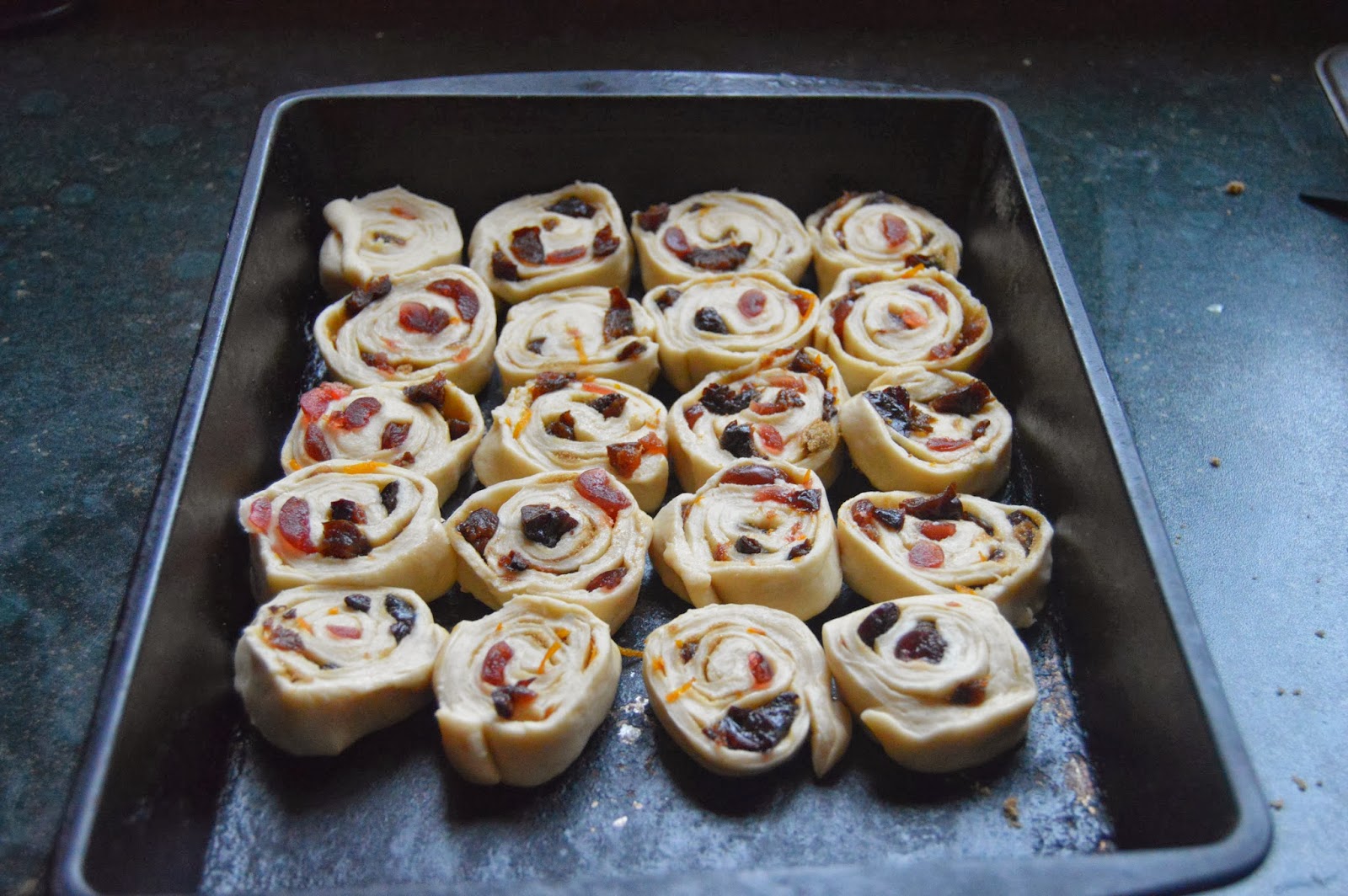 Roll up and cut into spirals. Leave to rise for another half our and bake! 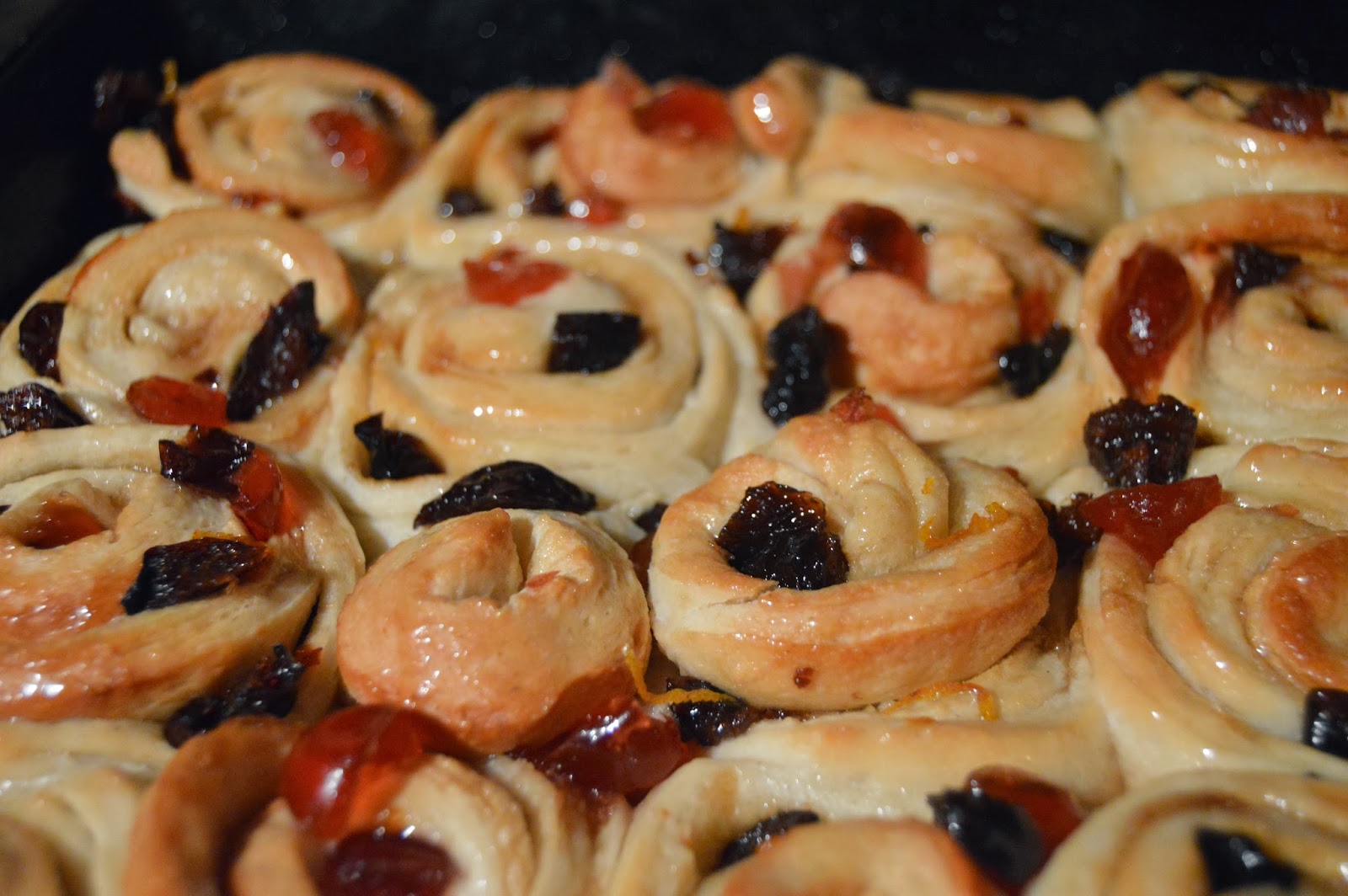 Brush with a little honey for extra shine. 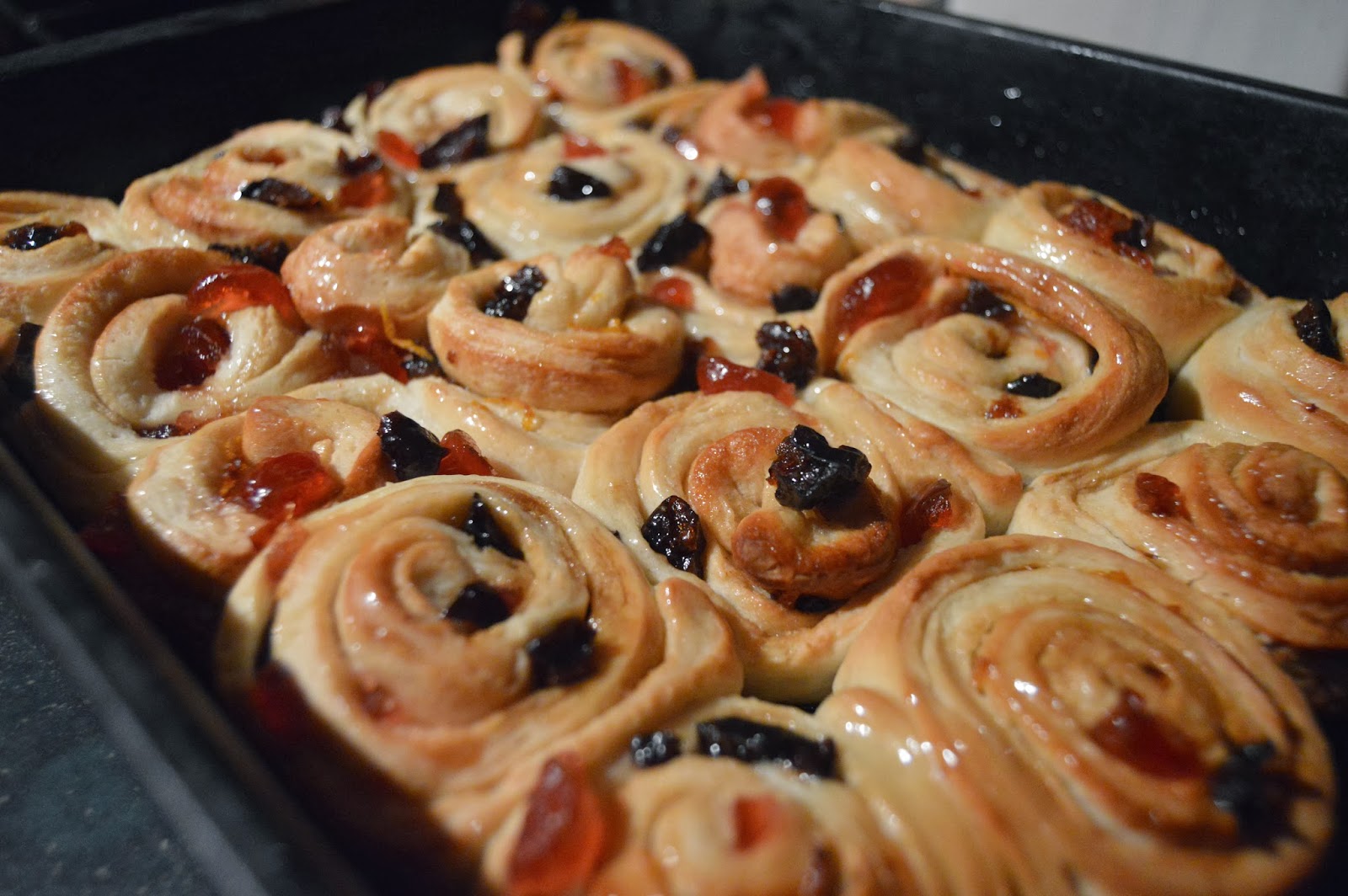 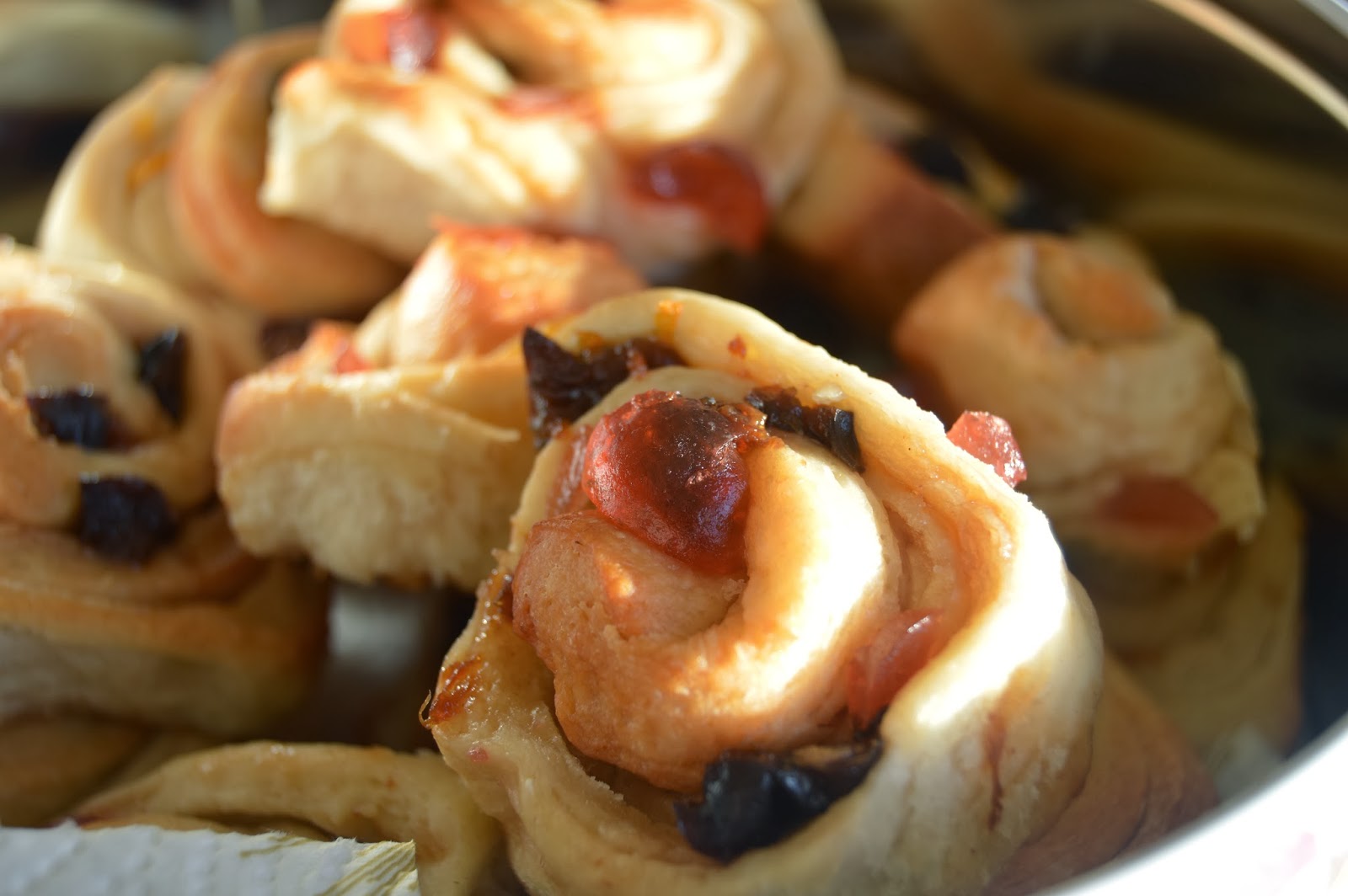 Enjoy with a cup of tea!

2. Make a well in the middle of the mixture and pour in the egg, milk and water, mixing to a soft dough.

3. Knead the dough until smooth and elastic - about 15 minutes. Shape into a round and place in a large oiled bowl. Cover with oiled cling film and leave in a warm place to rise for about 1 - 1 1/2 hours.

4. Once doubled in size, remove from the bowl and knock back with your fists. Knead for about 2 minutes until smooth.

5. Chop the prunes and cherries into small pieces. Mix in a bowl with the raisins, sugar and orange zest. Brush the melted butter over the dough and sprinkle with the fruit mixture. Roll up and cut into circles. Place in a baking dish, cover with greased cling film and leave to rise for another 30 minutes.

6. Remove the cling film and place in an oven at 190C (170°C fan). Bake for 15 - 20 minutes until golden and they sound slightly hollow when tapped with a finger. Brush quickly with honey and leave to cool before separating. 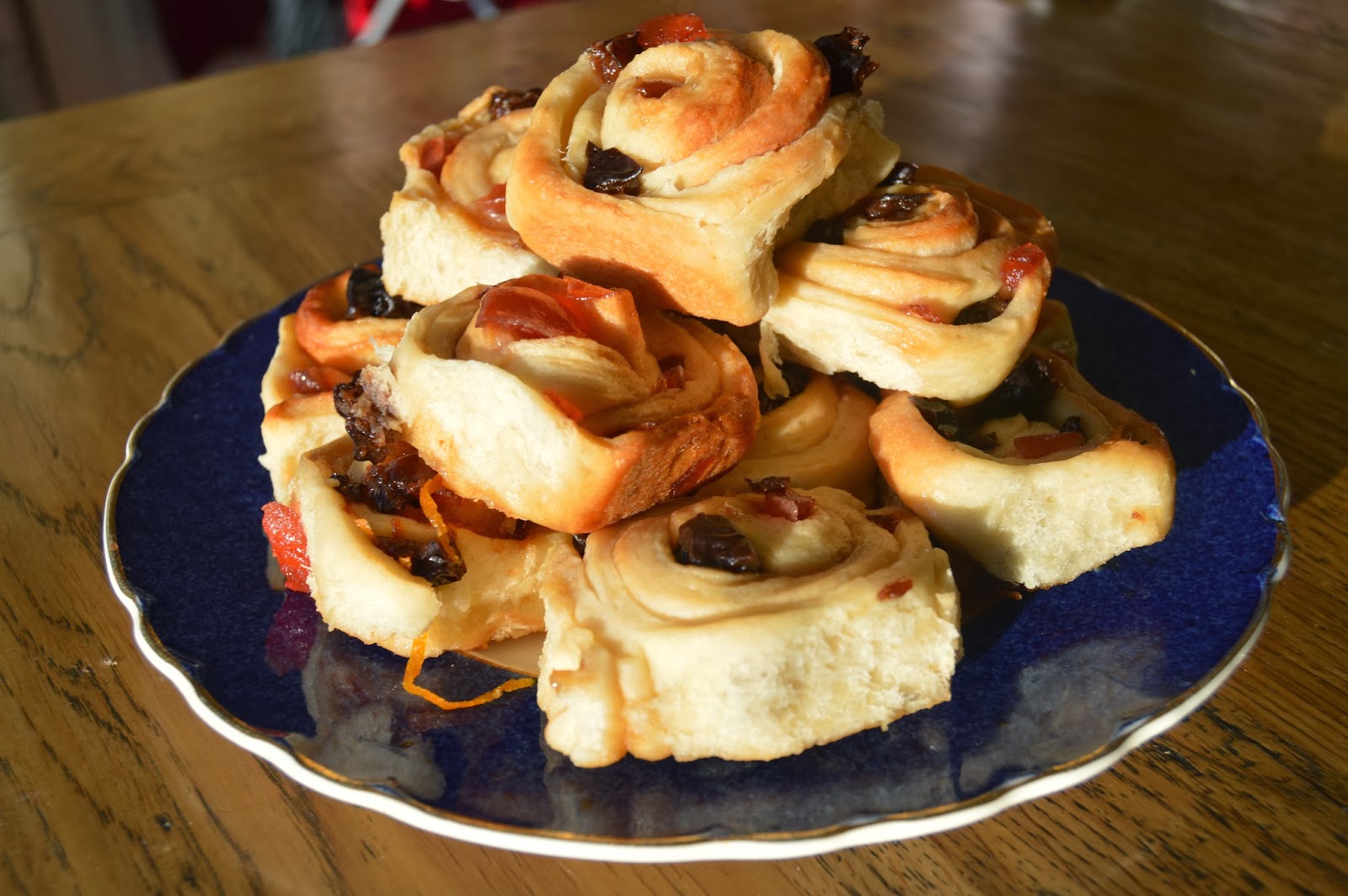