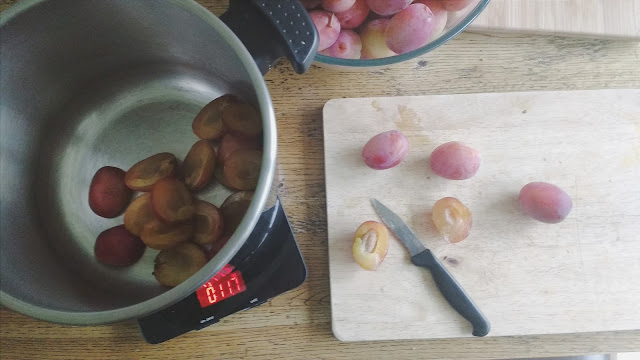 I think I’ve written a post every year about plums.
So, apologies - this isn’t going to be anything new!
But I feel that it’s important to write about it. Plum-picking, jam-making and crumble-eating have become such a September tradition that it would be a shame not to document the great plum glut.

I suppose my nostalgia is partly due to the fact that I’ll be moving away to England at the end of this month. I like to think that I don’t get homesick easily, but I know that once the newness of Cambridge wears off and the work sets in, I’ll begin to miss our little family traditions.

It’ll be things like the Saturday morning croissants. Or doing the pub quiz together after Sunday lunch, a cup of coffee in one hand and a square of dark chocolate in the other. It’ll be the Saturday night films, the Monday morning shopping trips and the spontaneous family walks.

As I said: little things. But significant nonetheless. I’ll have to make new routines and find new coffee shops - not to mention the friends to visit them with!

So that’s why plum-picking feels particularly important this year. We've made about fifteen jars of plum jam, a plum sauce and Molly's plum and olive oil cake - and there's still another huge bowl of fruit to go!
We'll probably end up making compote and maybe Izzy Hossak’s crustless plum tart; the combination of plums and almonds is hard to beat.

Making jams and preserves always gives me a warm, fuzzy feeling. I used to think it was down to the idea of storing up good things for the future, Little House on the Prairie style, but now I’d say it’s as much to do with the family traditions as it is to do with preparing for the winter months.

I might miss marmalade making in November, but this month I’ll treasure every last drop of syrupy plum jam.

1. Wash the jam jars in hot, soapy water, set them on a baking tray and dry them out in the oven at a low temperature. (This is called sterilising the jam jars, and is and important step to ensure that your jam doesn't go mouldy.)

2.  Put the plums and the water in a big saucepan (we use the base of the pressure cooker) and let them soften over a low heat. Add the sugar and stir over a gentle heat until all of the sugar has dissolved and you can't feel any gritty bits on the bottom.

3. Stop stirring, bring to a rapid boil and boil for 20 - 30 minutes. Test the jam for setting (put a bit onto a plate and see if it wrinkles when you poke it with your finger.) Remove any scum from the top and take off the heat. Let it sit for a few minutes.

3. Pour the jam carefully into the jam jars and leave to cool. Put the lids on when the jam is completely cool.