If you follow me on Instagram you'll be aware that I recently travelled to Dublin for a day out with the girls in my family. I hadn't been in years and my mum was full of stories about places to go and things to see. We took advantage of a day off and caught the early morning train, full of businessmen and women making their way to work. 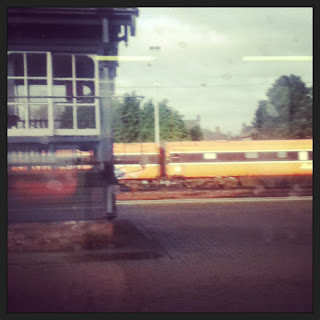 We passed cute stations with old-fashioned gatehouses; I would have got off to have a look had I been able!

After a two-hour journey we were ready for some food! It was only about 11 o'clock in the morning - just in time for brunch at Clery's department store. Confusingly, they have two or three places to eat! We chose the Ivy Tea Rooms because we thought the name sounded quaint and cute.

They had a small but delicious-sounding breakfast menu. I indulged in vanilla french toast with maple syrup and berries (some healthy antioxidants to balance the egg! Well, sort of…..). 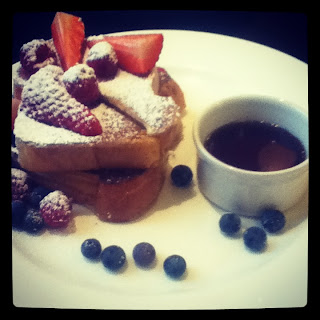 Next we walked along O'Connell Street and decided to do some sight-seeing. As an unashamed history nerd I made sure that we got to see the General Post Office, the place the rebels took over during the Easter Rising of 1916. It's a huge stone building that dates from the 19th century and it's pretty impressive to look at. Once you're inside you feel as if you've stepped back in time - there are dark wooden desks everywhere, a high-ceilinged atrium and beautiful cream-coloured architecture. Whilst many of the people there were visiting tourists like us, the post office is still in use today. There are still some mementos of its past, though: a large plaque (in both Irish and English) commemorates the events of Easter Monday and there's a big statue of the mythical hero Cúchulainn in the front window. If you look closely you can still see the bullet-holes on the outside!

After a look through some of the other big stores (Brown Thomas and Arnotts), we thought we'd go for a little stroll around Trinity College. Every so often a student would cycle past us and you could see groups of young people gathered around steaming cups of coffee on the cobbles. We wanted to look at the Book of Kells but unfortunately didn't get the chance! However, we managed to see both the modern and new parts of the building and I snapped a picture of a rather intriguing sculpture! 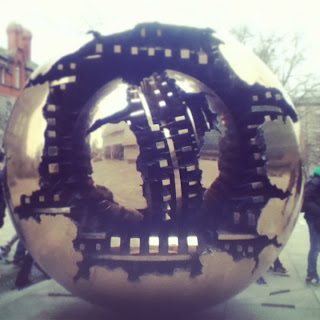 We did some more browsing and, weary and tired, found ourselves in the Powerscourt Centre. It's a bit misleading; you enter through the door of what looks like an ordinary town house, which then opens up to three floors with a central "square' in the middle. We were greeted by a very talented pianist and the clinking of many cups and saucers from the three restaurants in the area.

My family love Italian food, and so naturally picked the Italian restaurant on the top floor - Terrazzo Italia. We were served by a lovely Italian woman who clearly cared a lot about the food! We learnt later that her husband did all the cooking and she provided the front  of house services. 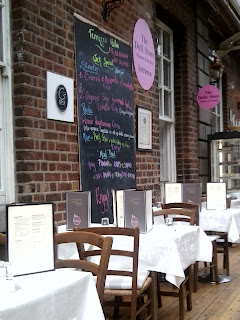 From our seat by the window we could see all of the square; and whilst it was a bit frightening to be so close to the edge of the platform, it was a unique dining experience! 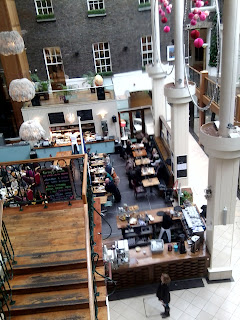 The menu was simple and full of gluten-free options, so there would be no problems there! We skipped starters and went straight for mains: 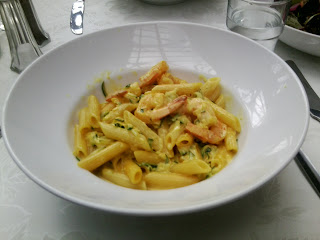 My pennette terrazzo - penne pieces with saffron, courgette and prawns. Light and delicate to compliment the seafood; a perfect combination.  I was congratulated for going without the Parmesan cheese - fish and cheese do not mix in Italia. 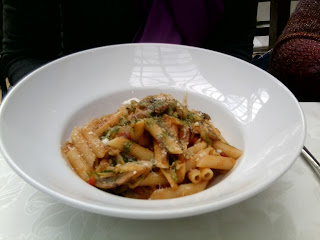 Mum had penne vegetariane - organic vegetables in a fresh tomato sauce. She said it was delicious! 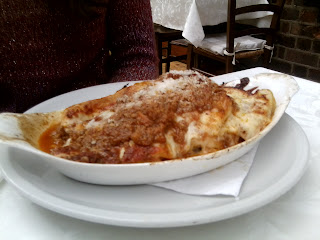 My sister played it safe with a traditional lasagne, filled with juicy meat and tomatoes and topped off with lots of mozzarella and cheese - mmm! I can vouch for the tastiness of this one... 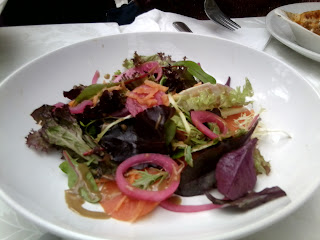 Our side salad made us feel a little healthier!

The meal came to a very reasonable total and the portions were neither too big nor too small. If you're in the Dublin area, make a stop here - there's food to suit all tastes!