Book Review #1 - The Grapes of Wrath

I had actually intended for my post about books to be my first book review. I had planned it out - a little introduction to me and why I love to read, followed by a nice sentence that linked into this review. However, when I began to type I realised the post would have to be split into two parts because there was simply so much to say.

So, without further ado (you've waited long enough already), let's launch into my new series of book reviews with a gritty one - The Grapes of Wrath by John Steinbeck.

If you study GCSE English Literature, you may have had the opportunity to read 'Of Mice and Men' by Mr Steinbeck himself. One of my friends loved the book and recommended it to me - but we didn't have a copy at home. (I refuse to buy Kindle books when I could have the real paper product in front of me. Call me old-fashioned.)
Still, my urge to read Steinbeck could not be calmed. If we didn't have OMaM, I would have to find something else... and here entered The Grapes of Wrath! 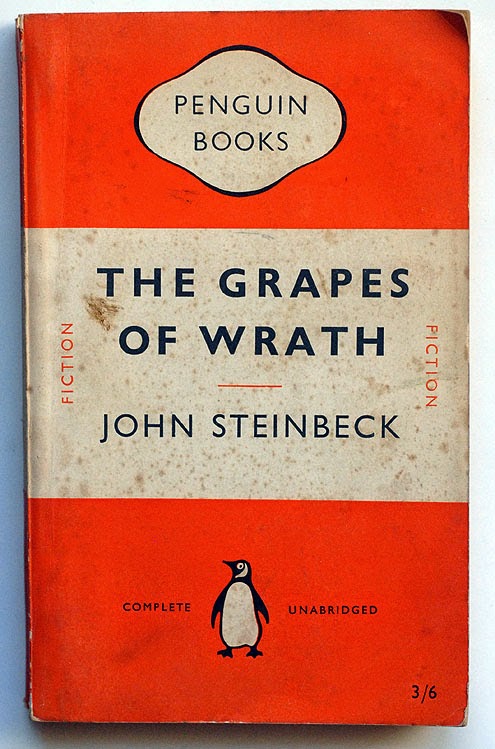 I read the book without knowing very much about America in the 1930s. Yes, TKAM (To Kill a Mockingbird, keep up!) was set in the same decade, but Harper Lee focused very much on the prejudice of society and so I didn't know that much about America during the Great Depression.

I've done a little bit of research and found out that Steinbeck 'frequently used his fiction to delve into the lives of society's most downtrodden citizens' (link), and that certainly comes across in this book. He focuses on the Joad family - a farming family, driven away from their dusty, overcultivated land by the threat of large companies and the hope of something better in California.

Unfortunately the Sunshine State isn't as sunny as they hoped. Everyone else in America has had the same idea and it's difficult to find work amongst all of the orchards. There is nowhere to stay but in camps, where the threat of being burnt out of their tents by the local sheriff is real.The government camps are brilliant, but it's impossible to stay there for long. It seems as if they are unloved and unwanted - the cast-offs of society.  The local people look down on the 'Okies' and seem to treat them like animals; they don't recognise that the travellers are simply trying to make a living.

It seems as if nothing is going well for the Joads. In that way, the book is quite dismal. Steinbeck doesn't shy away from killing off characters and disaster after disaster occurs. But I kept reading because I wanted to find out what would happen to this family that I had come to know so well - cheerful and organised Ma, optimistic Rose of Sharon, the quickly maturing Al... I felt a real connection with these people and I wished that I could make their situation better. The book is also written in a beautiful style  - descriptions of the hot, dusty journey; conversations between the shifty car dealers, perspectives from a shopkeeper - which piqued my interest and really added to the 'texture' of the book.

As I got closer and closer to the end of the book I wondered what would happen to the family - would they suddenly be rescued from their poverty? Somehow I didn't think so; that would have been too much of a 'Hollywood' storyline for Steinbeck. The ending is abrupt, which disappointed me slightly because I like everything to be wrapped up neatly, but on reflection I can see why Mr S chose to end the book in such a way. We will never know what happened to the Joad family, nor to the thousands of other families who migrated across America. But it's important that they are remembered not only for their perseverance, but for the kindness they showed to others even when they have nothing to share. It's often said that the less you have, the more generous you are, and that's a phrase that definitely applied to the Joads.

I enjoyed 'The Grapes of Wrath' a lot more than I thought I would. Once I got into it, it was very easy to read, and I liked learning a little more about the history of America. The book made me think about how I should treat other people, too, and how I should put myself in their shoes more often. It was challenging, thought-provoking, and a book that will linger in my memory for a while.
Labels: book reading review steinbeck