Hands up who loves pie. Chicken and leek, steak and kidney, sweet mincemeat, cherry, peach… Everyone has their favourites and I will be one of the first people to admit that pies are an essential part of baking.

Pies conjure up images from picture books, of freshly baked pastry sitting on the windowsill to cool. There's a historical link to them as well - people have been making pies for years! I have memories of coming home from school to a warm meat pie, fresh from the oven. They bring comfort, eaten with mashed potatoes and carrots or custard and cream.

There's no doubt about it; pies are good. 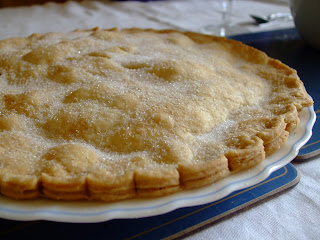 I'm ashamed to say that I've never made my own pastry before. I have very cold hands, and I'm always told that they would be perfect for pastry-making, but somehow I've never gotten round to it. When times are short it seems easier to pull out a packet of pastry from the freezer; even the defrosting can be speeded up in a microwave. Unfortunately I'm often left with a lot of extra pastry which is thrown in the bin, and so the advantage of making your own pastry is that you can choose exactly how much you want to make. The recipe is easy to scale up or down, as long as you keep the ratios the same.


As with cakes, there's a lot of debate as to what type of fat to use - butter, margarine or cooking lard. I chose to use a mixture of butter and lard as it's easier to rub in than plain butter and the margarine has a distinctive taste when cooked. Besides, if you're going to have pastry you want it to be as tasty as possible, otherwise it's not worth it! 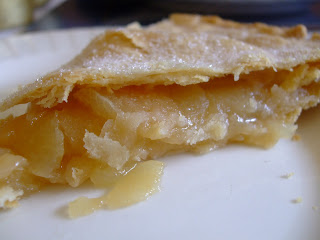 Cool hands are essential for this process - if they're too warm, the fat will melt into the flour and you will get a horrible mess. Try putting your hands under a cold tap for few minutes; or if you're really lazy you can just make this in a food processor instead. It's not quite as satisfying, though! 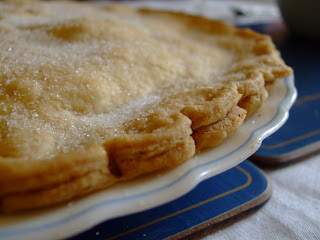 This is a very basic shortcrust pastry recipe. It's not too crumbly and you could use it for either sweet or savoury pies, adding a little sugar or seasoning as wished. The quantities given here make enough to bake a 25cm round pie; experiment and see how you go!

1. Heat the oven to about 200°C. First, make the pastry. Put the flour in a bowl and add the butter and lard, chopped up into little chunks. Rub it in as you would a crumble, until the mixture resembles fine breadcrumbs.

2. Slowly add a little water, using a blunt knife to mix it in using a "cutting" motion. Don't make it too wet; you want the pastry just to come together. Bring it into a ball and press in any additional bits of flour around the sides of the bowl. (If you have time here, you can "rest" the pastry for about half an hour. Don't worry, though - I didn't do it.)

3. Roll half of the pastry out to cover the bottom of the pie dish. Carefully place it in and cut off the excess.

4. Peel and core the apples. Chop them into pieces and sprinkle with sugar. Tip them into the prepared pie dish and moisten the edges of the pastry with a little water.

5. Roll out the other half of the pastry and place on top of the pie base. Cut off the excess from around the edges and crimp the edges, using your fingers or a fork. Cut three slits in the top of the pie and poke it with a fork (this is to let the steam escape).

6. Place the pie in the oven for half an hour, until golden. Sprinkle with sugar and serve with cream or ice-cream. 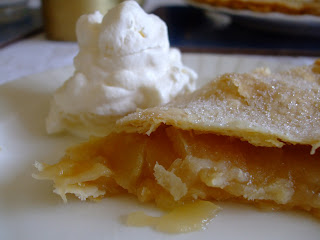